Do you support a presidential executive order that will fully and completely, without exception, ban torture and cruel, inhumane, and degrading treatment of prisoners in U.S. custody, anywhere in the world, including the transfer of prisoners to another country for torture?

http://www.nrcat.org/index.php?option=com_content&task=view&id=211&Itemid=160
Posted by Washington State Religious Campaign Against Torture at 12:26 AM No comments:

Keynote Address
“Torture and the American Future- a Moral and Political Reflection”
Speaker: Professor Rob Crawford is professor of modern history and culture at the University of Washington, Tacoma, where he teaches, among other courses, Post 9/11 America and Anti-Semitism and the Holocaust. Since 2004, he has been active in the anti-torture movement and in 2006 co-founded the Washington State Religious Campaign Against Torture.
Panel Discussion with Moderator: Mr. Rick Samyn, MSW, Pastoral Assistant for Social Justice Ministry - St. Leo Catholic Parish

Dr. Pauline Kaurin holds a PhD in Philosophy from Temple University, Philadelphia and is a specialist in military ethics, just war theory, philosophy of law and applied ethics. She is an Assistant Professor of Philosophy at PLU and teaches courses in military ethics, warfare, business ethics and philosophy of law. Recent articles include: Nothing New Under the Sun At Guantanamo Bay: Precedent and Prisoners of War and When Less is not More: Expanding the Combatant/Non-Combatant Distinction.

Andrew Williams, a former Lt. commander in the U.S. Navy, is now a practicing Silverdale attorney. In the Navy he was a Judge Advocate who served both at Naval Submarine Base, King’s Bay, Georgia, and on the USS NIMITZ. Mr. Williams recently resigned his commission in the Individual Ready Reserve due to torture and other improprieties committed by U.S. forces.

Posted by Washington State Religious Campaign Against Torture at 10:10 PM No comments:

Torture is a Moral Issue
Revised August 26, 2008
by Tom Ewell

The well-established, universal ethic of our common humanity, honored by all major religions, is the Golden Rule: "Do unto others as you would have others do unto you," or its negative corollary, "Do not do to others what you would not want done to you." Every child, every person, in every culture, knows and understands at some level the crucial importance of this bedrock, moral principle that honors our capacity for empathy, recognizes our mutual humanity, and establishes the most basic guide for teaching us to treat each other with respect, kindness and civility.

Torture is a violation of this Golden Rule. We know we personally do not ever want to be tortured, and we do not want our soldiers or our family members or our friends ever to be tortured. We know it is wrong whenever and on whomever it is used, and we need to stop our government from trying to convince us otherwise. We need to unequivocally condemn its use and to reclaim an America that respects international law and honors the humane treatment of others as we ourselves want to be treated.

We should not even be discussing the possible use or expediency of torture. It seems so below the America we can truly believe in. Americans are better than being torturers or complicit with torture.

A friend of mine, Charles Arbuthnot, now deceased, was an army chaplain who survived the invasion of Italy in WWII and went on to represent the World Council of Churches in the formulations of the Geneva Conventions that made torture illegal under international law. When the use of torture at Abu Ghraib by American forces was disclosed he was heartsick. He told of having to constantly fend off the temptation facing our soldiers to torture prisoners. He argued that the brutality of torture negated everything we were fighting for. "If we allow our sense of national identity to be lowered to the point that we can justify the use of torture in the name of protecting our sense of freedom and democracy," he said, "we do not have a freedom and democracy worth protecting." When our nation openly condones torture, we are morally bereft criminals who arrogantly violate the Golden Rule and international law.

The disclosure that our government produced an official policy to justify torture is not only a betrayal the values fought for by heroic veterans like Charles Arbuthnot, it is a betrayal of all Americans who fight for and believe in the American democratic ideals of respect for our common humanity.

The use of torture is wrong. It must be condemned, stopped, forbidden, and if used, the offenders must be held accountable and prosecuted. Let us work together to stop this outrageous justification and use of torture as a national policy in our name. 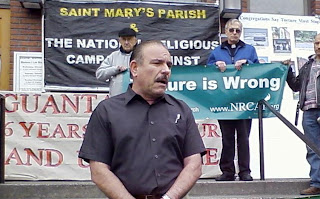 We are the Washington State Religious Campaign Against Torture

We go by the acronym WSRCAT

We are affiliated with the National Religious Campaign Against Torture

Which is also known as NRCAT (see http://www.nrcat.org/)