An Amazing Anti-Torture Week in the Puget Sound Area

An Amazing Anti-Torture Week in the Puget Sound Area
See posts below for these events:

Posted by Washington State Religious Campaign Against Torture at 7:45 PM No comments:

Ray McGovern on
Does Torture Work? 'Let's Have Both Sides of the Story'

Ray McGovern is active in Veteran Intelligence Professionals for Sanity (VIPS) and has been an outspoken critic of the flawed intelligence used to justify the Iraq war and of the use of torture.

Ray McGovern http://en.wikipedia.org/wiki/Ray_McGovern won the Intelligence Commendation Medal, and prepared the president's daily intel briefing in the Reagan and George H.W. Bush administrations. A Roman Catholic, McGovern recently published a stinging commentary on a 2009 poll result according to which most regular churchgoers (54 percent) believe torture can be "justified."

Information http://www.wsrcat.org or http://www.ufppc.org/local-news-mainmenu-34/9071/
Posted by Washington State Religious Campaign Against Torture at 11:02 PM No comments: 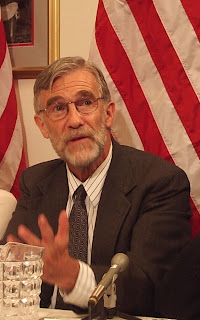 Washington State Religious Campaign Against Torture presents
Ray McGovern on "Why Accountability for Torture Is Crucial for Human Rights, Our Security and Our Souls"
Thursday November 12, 2009, 7:00 p.m., at Kane Hall, Room 220, University of Washington Campus, Seattle
Ray McGovern was a CIA analyst for 27 years. He is active in Veteran Intelligence Professionals for Sanity (VIPS) and has been an outspoken critic of the flawed intelligence used to justify the Iraq war and of the use of torture. He has written:
On April 16, President Barack Obama released ... documents [which] reveal that top CIA officials solicited and obtained from handpicked Department of Justice lawyers legal opinions based on an extraordinary premise; namely, that so-called "enhanced interrogation techniques" did not amount to torture unless they caused "pain equivalent to organ failure or death." With that very high threshold, the CIA was given free rein to use harsh techniques like waterboarding and sleep deprivation, to name just two of the torture techniques that find antecedents in the Spanish Inquisition. Several detainees died in CIA custody; the murders appear to qualify as capital offenses under 18 U.S.C. 2441, the War Crimes Act passed into law in 1996 by a Republican-controlled Congress.
Co-sponsors include ACLU-Washington; American Friends Service Committee - Pacific NW; Amnesty International Group 4, Seattle; Amnesty International Puget Sound; Backbone Campaign; Sound Nonviolent Opponents of War (SNOW); UW Amnesty International; UW Center for Global Studies; UW Center for Human Rights; UW Jackson School of International Studies; UW Latin American Studies Program; UW Law, Societies & Justice program; UW Southeast Asia Center; United Nations Association Greater Seattle Chapter; Washington Association of Churches; and Western Washington Fellowship of Reconciliation.
Information http://www.wsrcat.org
Posted by Washington State Religious Campaign Against Torture at 2:51 PM No comments:

For the past two decades, author and award-winning journalist Mark Danner has reported from Latin America, Haiti, the Balkans, and the Middle East, exploring not only the real consequences of American engagement with the world, but also the relationship between political violence and power. From the fall of the Duvalier dictatorship in Haiti to the tumultuous rise of Aristide; from the onset of the Balkan Wars to the painful fragmentation of Yugoslavia; and to the invasion of Iraq and the legacy of the Bush administration, Danner, former staff writer at The New Yorker and author of "Stripping Bare the Body: Politics Violence War", has visited some of the world’s most troubled regions, bringing back lessons on politics, violence, and war. Danner is also the author of "Torture and Truth: America, Abu Ghraib and the War on Terror."

Danner was recently in the news for his New York Review piece 'US Torture: Voices from the Black Sites,' which offered the first view of American torture inside secret prisons, based on a previously secret report by the International Committee of the Red Cross. Danner's pieces on torture in Stripping Bare the Body should be of particular interest.

info http://www.townhallseattle.org or http://www.markdanner.com
Posted by Washington State Religious Campaign Against Torture at 2:40 PM No comments:

cancelled: Nan Aron speaks out against torture Nov 9 in Seattle

Attorney General Eric Holder, writes Alliance for Justice president and founder Nan Aron, is a man on a hot seat that's getting hotter. Holder reportedly is authorizing a criminal investigation into the mistreatment of detainees by CIA interrogators, but President Obama has said he does not support a special commission. And some big names would be sure to come up in any kind of investigation: Dick Cheney, Donald Rumsfeld, Alberto Gonzales, George Tenet, John Ashcroft, and Condoleezza Rice. But Aron thinks Holder needs to go even further: While a full-scale investigation of the use of torture by the United States government will stir up passions on both sides, she writes, "it is our only hope for reaching some national consensus on the torture issue." Aron has been a leading voice in public-interest law for more than 30 years, and helped defeat Robert Bork's nomination to the Supreme Court in 1987.

Presented by Alliance for Justice and the Town Hall Center for Civic Life.

Note: this is not a WSRCAT event but we are in total agreement with Nan Aron's opinion that Holder needs to go further! We want accountability for the decision makers who authorized torture.
Posted by Washington State Religious Campaign Against Torture at 4:07 PM No comments:

Former CIA employee Ray McGovern will speak in a talk entitled "Why Accountability for Torture Is Crucial for Human Rights, Our Security and Our Souls."

Letter to U.S. Senators and Reps Regarding Guantanamo Bay

The Washington State Religious Campaign Against Torture was founded on a commitment to the equal dignity of all human beings, a principle enshrined in the United States Constitution and the Universal Declaration of Human Rights. We write to protest the grave and continuing violation of human rights in Guantanamo Bay, Bagram, and other prisons run by the U.S. government.

Over two hundred persons remain imprisoned in Guantanamo Bay. Many have been held for over seven years. Many have been subjected to harrowing ill-treatment, including torture. Only a small handful have ever been charged with a crime. Human rights organizations believe that many, and perhaps most, are innocent of any involvement with terrorism. Some remain imprisoned even though both the Bush and Obama administrations ceased to classify them as enemy combatants.

Now there are signs that the "Guantanamo model" is being exported elsewhere. The Obama administration is seeking to deny the right of habeas corpus review to individuals sent to Afghanistan from overseas locations. The administration is also crafting policies that would subject some individuals to indefinite detention without charge or trial and would authorize prosecution of others before military commissions lacking the procedural protections of civilian trials or military courts martial. The avowed purpose of the military commissions is to facilitate guilty convictions by revoking long-honored rights of the accused.

We deplore the attack on fundamental rights that as far back as the Magna Carta have been recognized as essential to a civilized legal order. The attack is as unnecessary as it is wrong. Our civilian court system has repeatedly shown itself capable of convicting genuine terrorists and placing them behind bars. Our government’s policies must be constrained by justice and not dictated by an unreasoning and indiscriminate fear.

We must also be mindful of the precedent we set by our actions. If the United States subjects foreign citizens to rigged trials and indefinite detention without trial, it will be unable to complain when foreign governments apply equivalent measures to U.S. citizens. But more fundamentally, our stance is based on moral principles, the principles of basic human rights due every human person.

We urge you to speak out and take action in support of the following principles:

1. Reputable human rights organizations must be granted access to prisoners in the custody of the United States, in order to monitor their conditions of confinement.

2. The United States must guarantee humane treatment to all prisoners, as required by domestic and international laws. No prisoners may be subjected to forced feeding.

3. The United States must release all prisoners not classified as enemy combatants. If the prisoners face a serious threat of persecution in their home countries, and if safe haven is not provided in third countries, they must be granted free asylum in the United States, without delay.

4. The United States must provide any prisoners accused of a criminal offense with a speedy trial affording due process protections equivalent to those of our regular civilian and military courts. No prisoner may be convicted unless he has been granted the opportunity of a full defense and his guilt is proved beyond a reasonable doubt.

5. The United States must release all Guantanamo Bay prisoners, and prisoners sent to Afghanistan from other countries, who are not charged with a genuine criminal offense, or who are acquitted following trial. (See point 4 for the minimum elements of a fair trial.) If such individuals face a serious threat of persecution in their home countries, and if safe haven is not provided in third countries, they must be granted free asylum in the United States, without delay.

6. Prisoners in Guantanamo Bay and those sent to Afghanistan from other countries must enjoy the right to effective legal representation.

7. All prisoners held by the United States in Afghanistan after being sent from other countries must be granted the right to habeas corpus review in U.S. federal court.

8. Individuals captured in Afghanistan and held there as combatants have the right to challenge their imprisonment on a periodic basis before a fair and impartial tribunal.

9. Victims of human rights abuses including torture, ill-treatment, and illegal imprisonment must have the right to sue those responsible. Civil remedies must not be blocked by sweeping appeals to state secrecy.

These actions constitute elementary requirements of human rights. They are required by our constitutional values and our international legal commitments. They are necessary for ensuring that U.S. citizens will be treated fairly and humanely in the future. They do not compromise, but on the contrary enhance, our national safety.

We would like to hear from you what you think should be done to restore due process and transparency, and to protect the rights of prisoners in U.S. custody. We would welcome an opportunity to discuss how we can work together to accomplish these goals. Please let us know how we can arrange a meeting to further this discussion.

Posted by Washington State Religious Campaign Against Torture at 7:18 PM No comments: